Call of Duty: Modern Warfare 2 – Here’s What Comes in Each Edition

Call of Duty: Modern Warfare 2 is coming to PS5, PS4, Xbox Series X|S, Xbox One, and PC on October 28, 2022. It comes with a campaign, a co-op special ops mode, and online multiplayer, as well as plenty of free online content scheduled for post-launch.

Modern Warfare II is up for preorder now. Below, you’ll find the full rundown about what comes in each edition, how much it costs, where it’s available, preorder bonuses, and more. This year, there are no versions for last-gen only. There’s a PS5-specific version, and then for the same price there’s a cross-gen bundle that gets you the PS4 and PS5 versions. The Xbox version only comes in the cross-gen bundle. It also includes any applicable preorder bonuses (see below). 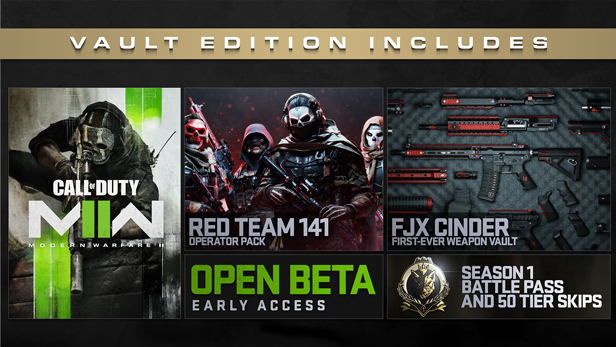 The vault edition costs $30 more than the cross-gen version and includes the following extras:

If you preorder Call of Duty: Modern Warfare II, you’ll get early access to the open beta. The dates for the open beta haven’t been announced yet.